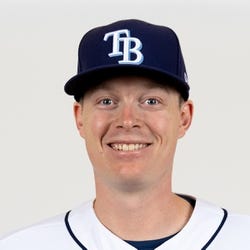 Out
Injury Finger
Est. Return 2/1/2023
2022 Stats
W-L
0-0
ERA
1.13
WHIP
0.67
K
38
SV
8
2023 Projections
W-L
ERA
WHIP
K
SV
Unlock Our Projections
2023 Fantasy Outlook
Fairbanks got off to a late start in 2022 due to a torn lat muscle that he suffered during spring training. The injury required multiple months of rest and rehab, plus a PRP injection, thus delaying his season debut until mid-July. While his first two appearances did not go smoothly, he ripped off 22 consecutive scoreless outings to close out the season. During the streak, he had a remarkable 36:3 K:BB ratio over 22 innings, 0.55 WHIP and a career-high eight saves. Fairbanks has always been among the league leaders in average fastball velocity, but he surprisingly added even more zip on his 4-seamer. He averaged a career-best 99 mph on the pitch, a nearly 2 mph increase from prior seasons. If targeting saves within Tampa Bay's closer committee, Fairbanks clearly has the most upside, but keep in mind he has averaged just 28.5 innings per season for his career. Injuries have been a constant, but the sky is the limit if he can remain healthy throughout 2023. Read Past Outlooks
read more
RANKSFrom Preseason
#

* Exit Velocity, Barrels/BBE %, Balls Hit 95+ MPH %, and Spin Rate are benchmarked against 2019 data (min 30 IP). See here for more exit velocity/barrels stats plus an explanation of current limitations with that data set.
K/BB
12.67
K/9
14.3
BB/9
1.1
HR/9
0.4
Fastball
99.0 mph
ERA
1.13
WHIP
0.67
BABIP
.288
GB/FB
2.00
Left On Base
89.0%
Exit Velocity
78.9 mph
Barrels/BBE
0.0%
Spin Rate
2475 rpm
Balls Hit 95+ MPH
11.7%
Swinging Strike
17.3%
Advanced Pitching Stats
Loading Advanced Pitching Stats...
Defensive Stats
Loading MLB Defensive Stats...
Stats Vs Today's Lineup
Want more matchup stats?
View Pete Fairbanks vs. Batter Stats
Loading Matchup Stats...
Rays Depth Chart
Our full team depth charts are reserved for RotoWire subscribers.
Subscribe Now
Recent RotoWire Articles Featuring Pete Fairbanks
The Z Files: OK, I'm SOLD
Yesterday
Yesterday
Todd Zola reconsiders his stance against adding holds as a roto category, and takes a look at the impact it would have on relievers like Devin Williams.
2023 Fantasy Baseball Rankings - Way Too Early Top 300 Draft Ranks
44 days ago
44 days ago
James Anderson provides a way too early top 300 rankings for those who have the itch to start drafting for 2023.
Closer Encounters: 2022 Saves in Review, Part 2
46 days ago
46 days ago
Ryan Rufe recaps the saves landscape in this year's NFBC Main Event and shares his own hits and misses from this past season.
Closer Encounters: 2022 Saves in Review, Part 1
52 days ago
52 days ago
Ryan Rufe recaps this past season's saves landscape. Just how many teams preferred closer committees over the conventional approach?
MLB: Postseason Cheat Sheet and Strategy
58 days ago
58 days ago
Todd Zola tackles the MLB Postseason Cheat Sheet for RotoWire and discusses his approach to postseason leagues this year.
Past Fantasy Outlooks
2022
2021
2020
Fairbanks experienced some early stumbles last year following a month-plus stay on the injured list in late summer due to a shoulder injury. However, he finished the season strong with seven consecutive scoreless appearances spanning 6.1 innings during which he allowed six hits and generated a 7:3 K:BB. The 28-year-old had five saves and 14 holds with a 3.59 ERA, 1.43 WHIP and 56:21 K:BB over 42.2 innings last season and was in the mix for save opportunities in 2022. However, he suffered a torn lat muscle in spring training and will miss at least the first two months of the regular season.
Twelve different Tampa Bay relievers earned saves in the abbreviated 2020 season, yet Fairbanks was not one of them. Had he done so in the final weekend, the club would have broken the all-time record for most pitchers with a save in a single season. Fairbanks went on to earn three saves in the playoffs, tying with Diego Castillo for most on the team in the postseason (ahead of Nick Anderson's 1). Fairbanks and his twice-repaired elbow have struck out 31% of hitters over the past two seasons, and a cleaned-up delivery gave him a bit more consistency. There are still times when the command goes AWOL, leading to some sketchy outings involving free passes. Manager Kevin Cash sometimes uses him as the first stopper out of the bullpen to shut down rallies. When Fairbanks is on, he does it with the best of them. He is fastball command away from being an elite reliever, so investing now in a keeper league is wise.
Fairbanks missed all of 2018 while recovering from Tommy John surgery but sprinted through three minor-league levels last season and ended up pitching in 21 games between Texas and Tampa Bay, who traded for him in mid-July. Despite never advancing beyond high-A ball coming into the season, Fairbanks caught the attention of both clubs due to his elite strikeout potential. The right-hander's height (6-foot-6) and ability to broach triple-digits with his fastball make him an imposing presence on the mound. He pairs the fastball with an above-average slider, using the combination to post a 14.6 K/9 in the minors and 12.0 K/9 in the majors in 2019. Fairbanks struggled with his command in the big leagues (4.29 BB/9) but registered a more digestible 2.50 BB/9 in the minors. If he can harness that command and continue refining his game, Fairbanks could emerge as a late-inning option in the not-too-distant future.
More Fantasy News