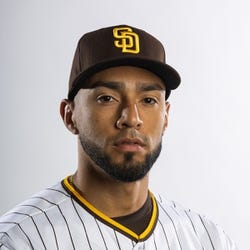 2022 Stats
W-L
5-1
ERA
2.27
WHIP
1.05
K
61
SV
1
2023 Projections
W-L
ERA
WHIP
K
SV
Unlock Our Projections
2023 Fantasy Outlook
After pitching in Japan for five seasons, Suarez underwent a bit of an adjustment period in his transition to MLB. The 31-year-old compiled a 4.66 ERA over his first month pitching in the States, but ultimately turned in a fantastic season overall. The rookie right-hander posted a 32% strikeout rate, 2.27 ERA (2.99 SIERA) and 1.05 WHIP across 47.2 innings but was limited to 45 appearances due to a knee injury that required a clean-up procedure in June. Suarez missed two months of action, but he was particularly sharp upon his return, striking out 32 over his final 24.1 innings. He did not allow an earned run at Petco Park all year and established himself as the primary setup man for the Padres. Suarez should maintain that role in 2023, but closing may be in his future after San Diego re-signed him to a five-year, $46 million deal. He'll need to cut down on his walks (11%) to take that next step. Read Past Outlooks
read more
RANKS
#447
ADP
#

* Exit Velocity, Barrels/BBE %, Balls Hit 95+ MPH %, and Spin Rate are benchmarked against 2019 data (min 30 IP). See here for more exit velocity/barrels stats plus an explanation of current limitations with that data set.
K/BB
2.90
K/9
11.5
BB/9
4.0
HR/9
0.8
Fastball
97.7 mph
ERA
2.27
WHIP
1.05
BABIP
.254
GB/FB
1.52
Left On Base
83.3%
Exit Velocity
80.6 mph
Barrels/BBE
3.9%
Spin Rate
2182 rpm
Balls Hit 95+ MPH
16.0%
Swinging Strike
12.0%
Advanced Pitching Stats
Loading Advanced Pitching Stats...
Defensive Stats
Loading MLB Defensive Stats...
Stats Vs Today's Lineup
Want more matchup stats?
View Robert Suarez vs. Batter Stats
Loading Matchup Stats...
Padres Depth Chart
Our full team depth charts are reserved for RotoWire subscribers.
Subscribe Now
Recent RotoWire Articles Featuring Robert Suarez See More
Collette Calls: Value in the Scrap Heap for 2023
23 days ago
23 days ago
Jason Collette's annual overview of overlooked players includes Eduardo Rodriguez, who shouldn't be forgotten about despite a poor first season in Detroit.
The Z Files: OK, I'm SOLD
62 days ago
62 days ago
Todd Zola reconsiders his stance against adding holds as a roto category, and takes a look at the impact it would have on relievers like Devin Williams.
World Series Betting Preview: Phillies vs. Astros Picks and Predictions
99 days ago
99 days ago
Erik Halterman gives his betting preview for the 2022 World Series with the latest odds along with his best bets and props to target for the Fall Classic.
Closer Encounters: 2022 Saves in Review, Part 2
107 days ago
107 days ago
Ryan Rufe recaps the saves landscape in this year's NFBC Main Event and shares his own hits and misses from this past season.
The Z Files: NFBC Holdem Rankings and Strategies
115 days ago
115 days ago
Todd Zola shares his gameplan and his rankings for NFBC Postseason Holdem contests.
2022 Fantasy Outlook
Suarez has never pitched in the States, but he has already made a name for himself in professional baseball. He emerged as one of the top closers in Japan over the last two years. His 2021 season with the Hanshin Tigers was especially impressive, with Suarez posting a 1.16 ERA and 0.77 WHIP to go along with 42 saves. He barely averaged a strikeout per inning in five seasons in Japan, and that simple fact will lead many to doubt Suarez as he transitions to Major League Baseball. However, Suarez has big-league velocity, sitting in the high-90s and reaching triple digits, and he can pull the string on the changeup to get hitters out in front. It's a pitch arsenal that looks like it will play in the majors, and the Padres are betting on it, having signed Suarez to a one-year deal. Bullpen roles are up for grabs in San Diego under new manager Bob Melvin.
More Fantasy News