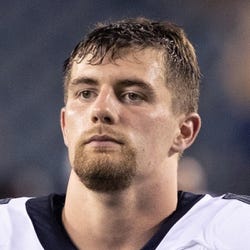 2022 Receiving Stats
REC
11
YDS
123
TD
0
AVG
11.2
TAR
14
Rest-of-Season Projections
REC
YDS
TD
AVG
TAR
Unlock Our Projections
2022 Fantasy Outlook
Stoll joined the Eagles as an undrafted free agent prior to last season, but he eventually rose to be the team's No. 2 tight end after the departure of Zach Ertz. That role didn't translate to many opportunities in the offense, however, as Stoll was targeted just five times all year and caught just four passes. While he enters the year with the inside shot to be the second tight end behind Dallas Goedert again, there's little indication his usage is about to change. Stoll has never projected as an offensive threat and topped out at 25 catches in college. Read Past Outlooks
read more
RANKS
#

TEPhiladelphia Eagles
Read More News
NFL Stats
Loading NFL Stats...
Fantasy/Red Zone Stats
See red zone opportunities inside the 20, 10 and 5-yard lines along with the percentage of time they converted the opportunity into a touchdown.
Loading Fantasy/Red Zone Stats...
Advanced NFL Stats
How do Jack Stoll's 2022 advanced stats compare to other tight ends?
This section compares his advanced stats with players at the same position. The bar represents the player's percentile rank. For example, if the bar is halfway across, then the player falls into the 50th percentile for that metric and it would be considered average. The longer the bar, the better it is for the player.
Air Yards Per Game
5.2
Air Yards Per Snap
0.16
% Team Air Yards
2.1%
% Team Targets
2.8%
Avg Depth of Target
6.3 Yds
Catch Rate
78.6%
Drop Rate
0.0%
Avg Yds After Catch
4.6
% Targeted On Route
7.8%
Avg Yds Per Route Run
0.68
Loading Advanced NFL Stats...
2022
2021
2022 NFL Game Log