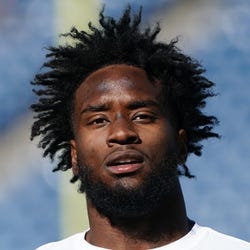 2022 Rush/Rec Stats
ATT
114
YDS
402
TD
3
YDS
288
TD
0
2023 Projections
ATT
YDS
TD
YDS
TD
Unlock Our Projections
2022 Fantasy Outlook
Carter had some mild preseason buzz as a fourth-round pick out of UNC last year, in part because there was weak competition for touches in the Jets backfield. While his final numbers on the season weren't too exciting, Carter did have three games with 100-plus total yards, including 172 and a TD against the Bengals in Week 8. A November ankle injury cost Carter three and a half games, and ultimately prevented him from topping 1,000 scrimmage yards on the season despite a 100-yard rushing game against the Jaguars in Week 16. A little undersized for a feature back at 5-8, 200, Carter has the receiving skills to hold up that end of the scatback stereotype, but he also offers some power and elusiveness to make an impact on the ground. Unfortunately for him, the Jets landed Breece Hall in the second round of this year's draft, and the Iowa State product figures to immediately step in as the lead runner. Carter could still provide some value on passing downs and as a backup, but he's a lot less appealing with Hall in the picture. Read Past Outlooks
read more
RANKS
#113.13
ADP
#

RBNew York Jets
Read More News
NFL Stats
Loading NFL Stats...
Fantasy/Red Zone Stats
See red zone opportunities inside the 20, 10 and 5-yard lines along with the percentage of time they converted the opportunity into a touchdown.
Loading Fantasy/Red Zone Stats...
Advanced NFL Stats
How do Michael Carter's 2022 advanced stats compare to other running backs?
This section compares his advanced stats with players at the same position. The bar represents the player's percentile rank. For example, if the bar is halfway across, then the player falls into the 50th percentile for that metric and it would be considered average. The longer the bar, the better it is for the player.
Broken Tackle %
18.4%
Positive Run %
83.3%
% Yds After Contact
66.9%
Avg Yds After Contact
2.4
Rushing TD %
2.6%
Touches Per Game
9.7
% Snaps w/Touch
32.3%
Air Yards Per Game
2.7
Air Yards Per Snap
0.09
% Team Air Yards
0.9%
% Team Targets
9.1%
Avg Depth of Target
0.8 Yds
Catch Rate
75.9%
Drop Rate
3.7%
Avg Yds After Catch
6.8
% Targeted On Route
20.3%
Avg Yds Per Route Run
1.08
Loading Advanced NFL Stats...
2022
2021
2022 NFL Game Log

Jets
View Full Depth Chart
Receiving Alignment Breakdown
See where Michael Carter lined up on the field and how he performed at each spot.
Detailed
Grouped
Side
Loading Alignment Breakdown...
Loading Alignment Breakdown...
Loading Alignment Breakdown...
Loading Team Alignment Breakdown...
2022 Michael Carter Split Stats
Loading NFL Split Stats...
Measurables Review View College Player Page
How do Michael Carter's measurables compare to other running backs?
This section compares his draft workout metrics with players at the same position. The bar represents the player's percentile rank. For example, if the bar is halfway across, then the player falls into the 50th percentile for that metric and it would be considered average.
* All metrics are from his Pro Day (not the combine).
Height
5' 8"
Weight
201 lbs
40-Yard Dash
4.50 sec
Shuttle Time
3.98 sec
Cone Drill
6.83 sec
Vertical Jump
34.0 in
Broad Jump
119 in
Bench Press
16 reps
Hand Length
8.75 in
Arm Length
29.13 in
Recent RotoWire Articles Featuring Michael Carter See More
Backfield Breakdown: 2022 Season in Review for NFL Running Backs
25 days ago
25 days ago
Jerry Donabedian looks at top performers from 2022 and checks in on players rehabbing serious injuries or potentially headed for free agency.
Box Score Breakdown: Snaps, Routes, Air Yards & Usage Rates from Week 18
27 days ago
27 days ago
James Cook got more snaps and carries than Devin Singletary even with the Bills playing their starters for the entire game Sunday.
Weekly Rankings: Week 18 Value Meter
33 days ago
33 days ago
Christian McCaffrey has another plus matchup in Week 18 against Arizona.
Backfield Breakdown: Week 17 RB Usage and Week 18 Waivers Preview
34 days ago
34 days ago
Cam Akers took on the third-largest snap share of all running backs Week 17, playing more than three-fourths of the Ram' snaps for a third straight week.
Exploiting the Matchups: Week 17 Start/Sit and Streamers
38 days ago
38 days ago
Jerry Donabedian thinks the Bears-Lions game will produce big stat lines for some players who are normally fringe starters in fantasy, including QB Jared Goff.
2021 Fantasy Outlook
Carter split the backfield workload at North Carolina almost equally with Javonte Williams last year and gained more yards, but it was the bigger, more physical Williams who got popped early in the second round by the Broncos, while Carter landed with the Jets in the fourth. That might not be the worst thing for his chances of making a splash as a rookie, though. While Williams has Melvin Gordon to compete with for touches, Carter has only Tevin Coleman, La'Mical Perine and Ty Johnson standing between himself and a regular role. Carter's short stature and natural pass-catching skills, as well as his solid showing as a pass protector, mark him as a receiving back in the NFL, but he also has the potential to become more than that. In college, he flashed some power and a willingness to lower his shoulder, though he mostly relied on elusiveness and nimble feet in traffic to create open space. If there's a template for Carter to follow and reach his ceiling, it's Austin Ekeler, though it took Ekeler a couple years to prove he could handle a lead role to the Chargers' satisfaction (and push Gordon aside in the process). Given the state of the Jets' backfield, they may be willing to throw Carter into the fire a little more quickly if he looks the part.
More Fantasy News