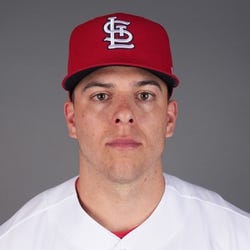 Out
Injury Finger
Est. Return 2/1/2023
2022 Stats
W-L
9-1
ERA
1.25
WHIP
0.74
K
94
SV
19
2023 Projections
W-L
ERA
WHIP
K
SV
Unlock Our Projections
2023 Fantasy Outlook
Helsley added 2.2 mph on his fastball in 2022, averaging 99.7 mph on the pitch while routinely reaching triple digits. He threw the third-most pitches in the league at 100 mph or greater and the added velocity significantly improved his effectiveness, as he went nearly two months without giving up an earned run. Couple this with a devastating slider (.111 BA) and the occasional curve (.000 BA) that opposing batters struggled to hit and Helsley turned in the finest season of his career. He posted career highs in innings (64.2), strikeouts (94), saves (19) and wins (9), which made him one of the most impactful waiver wire additions last season. Helsley's 1.25 ERA ranked third in the league among qualified relievers, while his 0.74 WHIP ranked second. The right-hander jammed his finger at the end of last season, but assuming he's healthy entering 2023, he's likely to be drafted among the top seven or eight closers. Read Past Outlooks
read more
RANKSFrom Preseason
#

* Exit Velocity, Barrels/BBE %, Balls Hit 95+ MPH %, and Spin Rate are benchmarked against 2019 data (min 30 IP). See here for more exit velocity/barrels stats plus an explanation of current limitations with that data set.
K/BB
4.70
K/9
13.1
BB/9
2.8
HR/9
0.8
Fastball
99.7 mph
ERA
1.25
WHIP
0.74
BABIP
.199
GB/FB
0.75
Left On Base
93.4%
Exit Velocity
80.9 mph
Barrels/BBE
4.0%
Spin Rate
2585 rpm
Balls Hit 95+ MPH
16.9%
Swinging Strike
18.8%
Prospect Rankings History
View Complete Ryan Helsley Prospect Ranking History
Advanced Pitching Stats
Loading Advanced Pitching Stats...
Defensive Stats
Loading MLB Defensive Stats...
Stats Vs Today's Lineup
Want more matchup stats?
View Ryan Helsley vs. Batter Stats
Loading Matchup Stats...
Cardinals Depth Chart
Our full team depth charts are reserved for RotoWire subscribers.
Subscribe Now
Recent RotoWire Articles Featuring Ryan Helsley
2023 Fantasy Baseball Rankings - Way Too Early Top 300 Draft Ranks
40 days ago
40 days ago
James Anderson provides a way too early top 300 rankings for those who have the itch to start drafting for 2023.
Closer Encounters: 2022 Saves in Review, Part 2
42 days ago
42 days ago
Ryan Rufe recaps the saves landscape in this year's NFBC Main Event and shares his own hits and misses from this past season.
Closer Encounters: 2022 Saves in Review, Part 1
48 days ago
48 days ago
Ryan Rufe recaps this past season's saves landscape. Just how many teams preferred closer committees over the conventional approach?
Past Fantasy Outlooks
2021
2020
2019
The most memorable part of Helsley's major-league career to date is how he entered the 2020 season as the de facto closer due to injuries, opt outs and COVID breakouts. The truth is, nothing in his profile really screams "closer." Sure, he can pump gas with the best of them, but the outcomes off his fastball do not exactly validate a fastball-heavy approach to his game. The cutter has served as a nice complement to the fastball, and he has used his curveball as his primary offspeed pitch because his changeup makes the rarest of appearances. He has essentially been split neutral in his time at the big-league level, but 20 walks and eight homers in 48.2 career innings does not make for a high-leverage reliever. There is still room for growth here and you can't quit on high-90s heat, but without consistent control, he is not leaving middle-relief work any time soon.
A starter throughout most of his minor-league career, Helsley transitioned to a relief role during his first season in the majors, tossing 36.2 innings in 24 appearances. The move to the bullpen befits his profile as a flame throwing right-hander with one dominant pitch and questionable control. That dominant pitch is a four-seam fastball that approaches triple-digits on the radar gun and has been graded as his only plus offering. Although Helsley registered a middling 20.9 K% during his time with the Cardinals last season, he averaged over a strikeout per inning throughout his minor-league career and has a curveball that is good enough to function as an effective complement to his heater. The Cardinals are unlikely to have a rotation spot open for Helsley next season, so they will likely again deploy him as a reliever. He could compete for the closer role with Jordan Hicks out to begin the campaign.
A shoulder injury limited Helsley to just 12 starts in 2018, but he showed enough promise in those starts for the Cardinals to add him to the 40-man roster for Rule 5 draft protection. At Double-A Springfield, Triple-A Memphis and one rehab start in rookie ball, the 24-year-old combined for a 3.97 ERA, striking out 28.1% of opposing batters and holding them to a .190 batting average. He did battle some walk issues (11.0 BB%), and that's not a new problem for Helsley. Much of the righty's profile reads like a reliever -- iffy command, a questionable changeup and a fastball that can touch 100 mph. If the Cardinals elect to move him to the bullpen this season, he has the tools to make a big-league impact right away. If they keep him as a starter, it will be harder for Helsley to crack the roster.
More Fantasy News