By the conclusion of the 2021-22 season, guys like Tyrese Haliburton, Anfernee Simons, and Tyrese Maxey showed elite skills and bright futures. The aforementioned names are key contributors on their teams and will likely pick up where they left off. However, the following list features players poised to make a leap or burst onto the scene. The seven breakout candidates below warrant serious attention.

Minnesota has championship-caliber upside. Anticipating a third-year leap from Edwards is a key reason why. Freshly 21 years old, Edward's stats climbed across the board in year two:

He's well-positioned to climb into elite territory in year three. Edwards is physically gifted, thriving with volume, and on a talented roster that can spare him energy when needed. Looking at how the leap can take place, perhaps Edwards' will improve stylistically: (data via Bucket List) 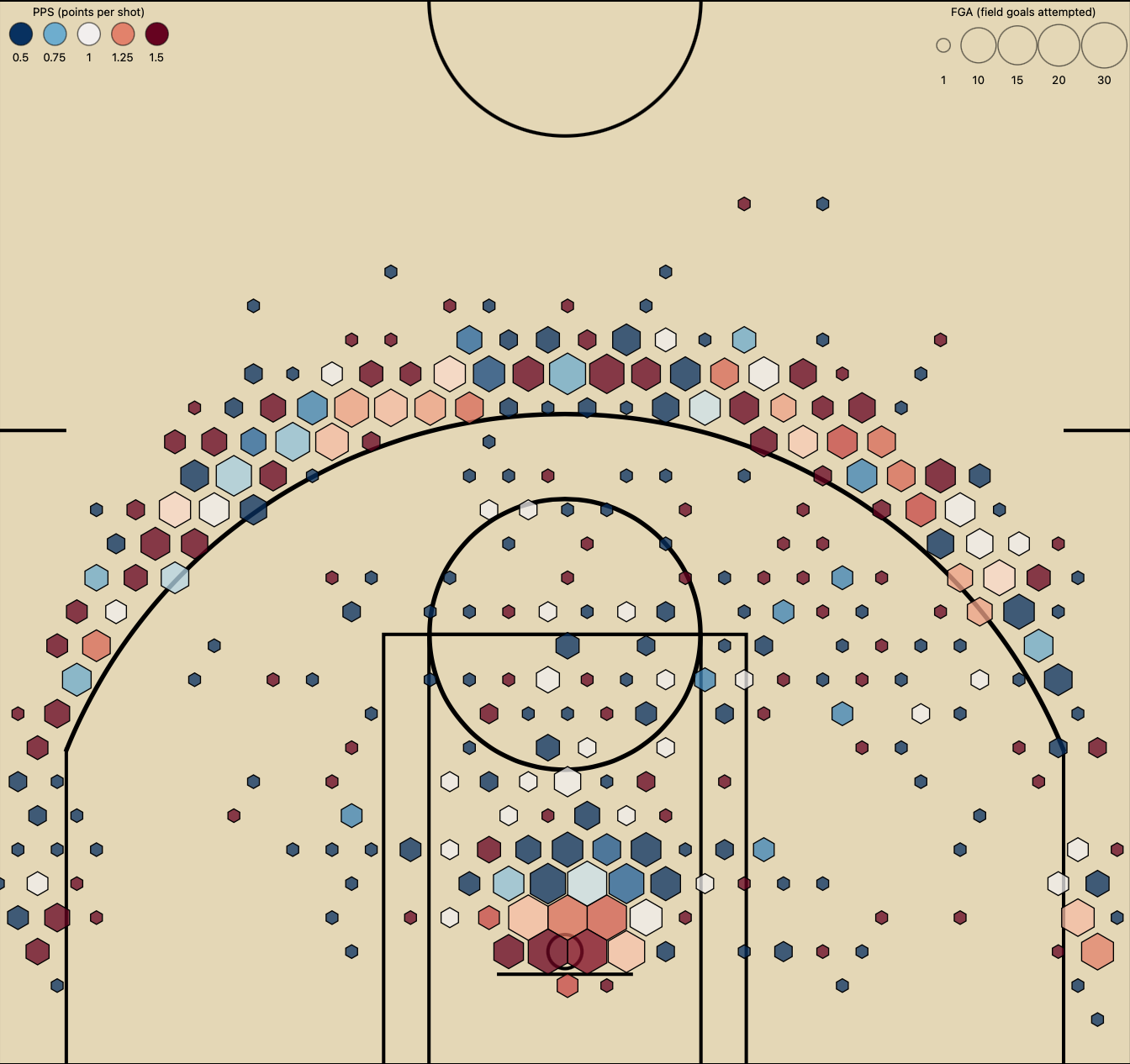 He can get a bucket from anywhere, but there is no go-to location Edwards dominates from. He's a league-average finisher around the restricted area. Edwards has the profile to dominate how he wants to; his next step is manipulating the game in such a way.

Post All-Star Break, Edwards connected on 36.4% of his threes. He attempted the sixth-most threes per game last season. Of those six players, only four (Stephen Curry, Fred VanVleet, Buddy Hield, and Edwards) ranked in the top 100 in three-point percentage, with Edwards ranking 91st. Even a slight uptick in percentage would vault him into the top tier of shooters.

A boost in his playmaking capabilities would unlock new dimensions to his offense. Getting screens from Rudy Gobert will be helpful. Minnesota should run more stretch-four offensive sets to clear the lane for Edwards. There is a lot to like. A breakout is the trajectory.

Sengun is an up-and-coming versatile hub for the Rockets. There are a range of quality metrics to support that reputation:

Eurobasket was promising for Sengun. He averaged 16.5 points per game while connecting on 61.8% of his 2Pt. He supplemented the scoring with 8.2 rebounds, 2.2 assists, 1.2 steals and 0.7 blocks across six contests for Turkey.

The Rockets' trading Christian Wood unlocks additional usage for Sengun. Settling into a consistent role could boost his efficiency. He's a good partner for Jabari Smith. The pairing of Wood and Sengun wasn't effective last season -- with Houston recording a minus-11.4 differential when sharing the court.

Turner's presence in Indiana remains an obstacle for Jackson to be unleashed. Indiana can only benefit from seeing Jackson in a larger sample size. The Pacers are supposedly in ongoing trade talks that feature Turner heading to Los Angeles. Frankly, it's surprising that a deal hasn't come to fruition yet. Down the stretch of the season, it's likely that Jackson, Jalen Smith, and Goga Bitadze are soaking up the majority of big-man minutes.

All three are flawed, but all have ample room for progression. In the case of Jackson, he's not capable of putting the ball on the floor -- 74.2% of his true-shot attempts came within four feet of the basket. The 20-year-old profiles as a pure rim-runner for the upcoming season. Notably, his three-point shooting experiment isn't fruitless, as Jackson connected on 31.3 % (5-of-16 3Pt) of his triples as a rookie.

Defensively, the shot-blocking profile, active hands, and stellar length overshadow some concerns that could keep him off the floor. Jackson commits a foul on 6.1 % of his defensive possessions (bottom-10 percentile in the league among bigs). Defensive positioning needs work. Awareness as a team defender needs work. Overall, he ranks in the 52nd percentile for points allowed per possession as a primary defender.

Although his ceiling is currently limited, Jackson is logically due to grow. His numbers are hard to argue with. Jackson's full per-36 minute stats amount to 19.8 points, 9.9 rebounds, 3.5 blocks, 1.7 steals, 0.7 assists and 2.7 turnovers per game.

While on the 2019-2020 Cavaliers, Sexton averaged 20.8 points, 3.1 rebounds and 3.0 assists while shooting 47.2% from the field and 38.0% from three. Cleveland finished with the second-worst record in the NBA that season. That is excellent production on a team devoid of surrounding talent. Utah profiles similarly and represents a suitable environment for stat accumulation.

Sexton averaged 24.1 points and 4.4 assists during the 2020-2021 campaign, showing improved passing chops. The 23-year-old returning to that level and achieving new facilitating heights is certainly possible. Offensively, the surrounding cast in Utah is underrated. The environment for spacing and pulling gravity away from Sexton is viable.

Sexton is currently the only ball handler baked into Utah's future. With proven scoring abilities, his role will support strong production.

(Chart and below stats courtesy of CleaningTheGlass)

Last season with Miami, Martin logged nearly 1,600 minutes -- vastly surpassing his two seasons in Charlotte combined. Martin connected on 42.1% of his threes while attempting 2.6 per game across 60 appearances. That appears unsustainable. It's tough to tell where the median is.

Despite settling for triples at times, Martin shoots confidently and moves well without the ball. Miami's offense generates a lot of open looks, but given the likelihood for that to continue, it's not a facet of regression to consider in Martin's stock.

The combo-forwards in Miami's offense are responsible for floor spacing and switchable defense -- including big assignments against larger frontcourts. Martin isn't as physical as Tucker, but he's significantly younger, a similar height and slightly quicker. He's graded as a plus-defender throughout his young career and is a constant hustler. There is upside for a breakout season.

Many traits that made him the No. 1 pick remain. Fultz generates separation well, is an excellent finisher with good body control, succeeds mid-range, and is a quality attacker/playmaker. Fultz trailed only Trae Young in high-value assists (creating 3Pt/open looks at the rim/FTAs) per possession last season. When he was on the floor, Fultz assisted on 45.2 % of his teammates' buckets -- highest in the league.

Admittedly, Fultz's sample last season post ACL-recovery was just 18 games. Nonetheless, he's very clearly a gifted facilitator. As a scorer, Fultz assertively gets to his spots, but his shooting range is still a glaring weakness (4-for-17 3Pt last season). However, even when he's not knocking down longer jumpers, he'll find ways to succeed through the abovementioned strengths. He operates with a high degree of difficulty by constantly navigating traffic. Fultz connected on 57.6 % of his shots in the lane and at the rim -- slightly above league average.

Getting to play with potential supernova Paolo Banchero, alongside impressively polished Franz Wagner and Wendell Carter, Fultz is in his best situation yet. The 24-year-old is a dark-horse candidate for the Most Improved Player award.

UPDATE: Fultz is battling a toe fracture. He's questionable for the season opener. Orlando's offense looked fragmented without him in the franchise's preseason debut against Memphis.

Staying in Orlando, Wagner is a star on the rise heading into year two.

At 6-foot-10, Wagner possesses elite size as a combo forward. Set to play small forward often in Orlando this season, Wagner will have an edge physically. He's a stout defender with a well-rounded offensive game. As a rookie last season, Wagner averaged 15.2 points, 4.5 rebounds, 2.9 assists and 1.3 steals/blocks.

Wagner is a triple-threat option and multi-level scorer. He can draw fouls and already carries a credible handle and three-point stroke. Despite battling an ankle injury throughout Eurobasket, Wagner averaged 16.1 points, 4.0 rebounds, 1.4 assists and 1.4 steals/blocks for third-place Germany while shooting 52.7% from the field.

Like Fultz, and partially because of Fultz, Wagner's life should be much easier this season. A lot of gravity will be attracted elsewhere. His usage could suffer, but Wagner's talent still puts a breakout on the horizon.

Join Our Subscriber-Only NBA Chat
Chat with our writers and other RotoWire NBA fans for all the pre-game info and in-game banter.
Join The Discussion
ABOUT THE AUTHOR