This article is part of our In-Season Strategy series.

In this article, I'll be evaluating some of my previous takes from throughout the season. Acknowledging my bad sells, good buys and continued sentiments. Let's dive in.

Continue buying on Collin Sexton. I've been in on Sexton since preseason. It never wavered. His career numbers are excellent. He's averaging 17.6 points and 7.2 assists per game over his last five contests. That stretch is easily his best of the season. He hadn't recorded back-to-back games with three-plus assists prior to this stretch.

Sexton's playing time could continue to fluctuate given the general variability in Utah, but his comfort in the offense will only grow.

Botched by me: Sell Klay Thompson

"Last season, Thompson connected on 38.5% of his threes -- a fine but career-worst figure…he has struggled out of the gates in 2022-23, hitting just 28.6% of his 8.2 three-point attempts per game. He'll improve, but I believe that the overall trajectory will continue, and Thompson will finish with a similar/worse 3P% compared to last season.

Today, Dec. 1, Thompson is raining in 39.2 percent of 9.5 (!!) three-point attempts per game. It's a career-high attempts per game, and he boomed for 40 points against Houston. He's a GOAT. Golden State has gotten lackluster production from Jordan Poole, but even if he improves, Thompson hovering around his current production seems realistic.

Last week I advocated for Nance. Here I'm doubling down. He should be really easy to acquire if you put your mind to it. Nance is a good fantasy option to have on your bench.

"Nance yields an excellent plus-10.4 point differential when on the court -- second highest on the Pelicans behind Jose Alvarado and ranking in the 83rd percentile league-wide positionally.

Nance is dominating, and versatility is underrated. Grading as an above-average rebounder, passer and steal/block collector at his position (via CleaningTheGlass), he's also hitting a ridiculous 67.6% of his field-goal attempts."

Among all players receiving at least seven offensive possessions per game, Nance ranks second league-wide by generating 1.234 points per possession. He's still shooting an awesome 66.7 percent at this updated publication. His floor is nice. If you monitor the Pelicans' schedule and start Nance against smaller/uber-athletic squads (Golden State/Boston/Houston), he'll reward you.

Botch by me: Sell the rookie

Sticking with per-possession efficiency, Mathurin is impressing, averaging 1.050 points per possession and ranking 33rd among qualifiers (players averaging 15.0-plus possessions per game is the criteria).

Mathurin's skills finishing through contact and creating points for himself are awesome. His 5.9 free-throw attempts per game rank 22nd league-wide, just ahead of Donovan Mitchell. Paolo Banchero is rightfully the Rookie-of-the-Year favorite, but Mathurin should not be slept on due to the production he supplies on a competitive Pacers team -- a 12-9 Pacers team lacking a single big wing on the whole roster. Mathurin is a huge part of the success in Indiana.

Side note: I'm bummed to see Oshae Brissett scratched from a real role…not sure what happened there, doesn't make sense at all.

Botch by me: Sell Jaren Jackson

I win a lot of fantasy leagues by ensuring durability. It's a good foundation for putting yourself in positions to win. JJJ isn't a dude I buy many fantasy shares of. His fantasy track record and non-linear growth gave me pause. But, he's a rare talent. His fluidity and mirroring on defense are crazy, and he must be respected as a shooter, making him multi-dimensional.

Jackson's fantasy performance has been great thus far. He's receiving consistent offensive workloads in Memphis while averaging a career-best 4.5 free-throw attempts per game through six contests. For returning so recently, that's a great sign. I was too low on him.

Botch by me: Sell Lopez

Brook Lopez is dominating. He's a real DPOY candidate. In late October, I expressed doubt that it was sustainable, saying:

"Motivation to sell-high stems from an unsustainable block rate and his tendency to lull in production at times. Lopez has never averaged more than 5.0 rebounds per game in a season with Milwaukee. That puts pressure on the soon-to-be-35-year-old to score."

Everything is being sustained. Lopez is averaging 15.5 points, 5.8 rebounds and a career-high 2.9 blocks per game. His 40.2% clip on 5.9 attempts per game from beyond the arc is also a career best. I have nothing but praise, conveyed through the images below.

He's convincingly leading the league in shot contests (data via NBA.com) and block rate (via Statmuse). 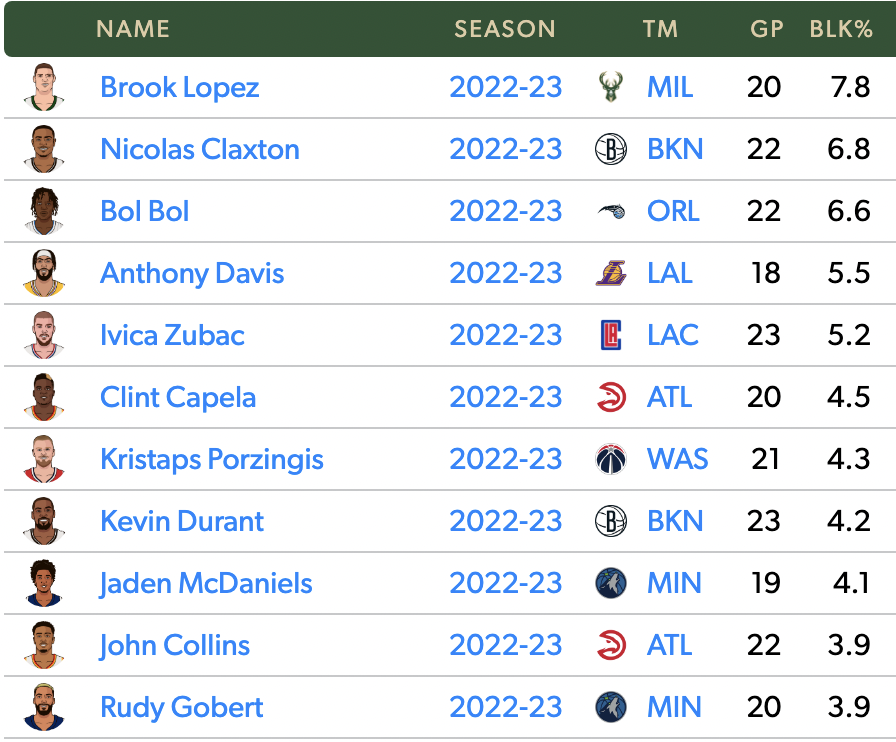 Buy-low Truth: In on Norman Powell.

Powell has top-tier microwave scoring abilities. It was clear as day that Powell was eventually going to begin producing for the Clippers. He's connected on 41.0 percent of his triples across the last three seasons while averaging 17.9 points per game over that span.

Regardless of role, his ceiling is solid. He's averaged 21.8 points per game over his last five contests despite never logging 30 minutes.

Join Our Subscriber-Only NBA Chat
Chat with our writers and other RotoWire NBA fans for all the pre-game info and in-game banter.
Join The Discussion
ABOUT THE AUTHOR