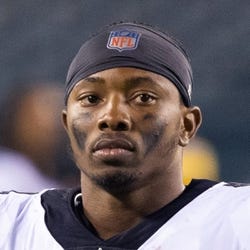 2022 Rush/Rec Stats
ATT
53
YDS
240
TD
4
YDS
169
TD
0
Rest-of-Season Projections
ATT
YDS
TD
YDS
TD
Unlock Our Projections
2022 Fantasy Outlook
Gainwell showed occasional flashes of productivity as a rookie fifth-round pick last season but never established a consistent role in the Philadelphia backfield. He topped 80 scrimmage yards on three occasions, Weeks 4, 13 and 18, which accounted for nearly half his yardage for the season. Gainwell mostly saw playing time on passing downs, but he was arguably more effective as a runner, with 4.3 YPC and five TDs on only 68 carries, while he managed only 5.1 YPT and dropped five passes. His role for Year 2 is uncertain, as Philadelphia doesn't seem to view Miles Sanders as a true No. 1 running back, which could open the door. Gainwell’s skill set is similar to that of his former Memphis teammate Tony Pollard, including the sub-4.5 speed, only Gainwell doesn't have someone with the pedigree or massive contract of Ezekiel Elliott ahead of him on the depth chart. Read Past Outlooks
read more
RANKS
#136.18
ADP
#

RBPhiladelphia Eagles
Read More News
NFL Stats
Loading NFL Stats...
Fantasy/Red Zone Stats
See red zone opportunities inside the 20, 10 and 5-yard lines along with the percentage of time they converted the opportunity into a touchdown.
Loading Fantasy/Red Zone Stats...
Advanced NFL Stats
How do Kenneth Gainwell's 2022 advanced stats compare to other running backs?
This section compares his advanced stats with players at the same position. The bar represents the player's percentile rank. For example, if the bar is halfway across, then the player falls into the 50th percentile for that metric and it would be considered average. The longer the bar, the better it is for the player.
Broken Tackle %
9.4%
Positive Run %
94.3%
% Yds After Contact
47.5%
Avg Yds After Contact
2.2
Rushing TD %
7.5%
Touches Per Game
4.5
% Snaps w/Touch
24.5%
Air Yards Per Game
1.4
Air Yards Per Snap
0.07
% Team Air Yards
0.5%
% Team Targets
5.7%
Avg Depth of Target
0.8 Yds
Catch Rate
79.3%
Drop Rate
6.9%
Avg Yds After Catch
6.7
% Targeted On Route
14.9%
Avg Yds Per Route Run
0.87
Loading Advanced NFL Stats...
2022
2021
2022 NFL Game Log

vs 49ers
Sunday, Jan 29th at 3:00PM
Overall QB Rating Against
63.4
Cornerbacks
73.4
Safeties
60.8
Linebackers
63.1
Loading Opponent Pass Defense Stats...
2022 Kenneth Gainwell Split Stats
Loading NFL Split Stats...
Measurables Review View College Player Page
How do Kenneth Gainwell's measurables compare to other running backs?
This section compares his draft workout metrics with players at the same position. The bar represents the player's percentile rank. For example, if the bar is halfway across, then the player falls into the 50th percentile for that metric and it would be considered average.
* All metrics are from his Pro Day (not the combine).
Height
5' 9"
Weight
200 lbs
40-Yard Dash
4.44 sec
Shuttle Time
4.46 sec
Cone Drill
7.26 sec
Vertical Jump
35.0 in
Broad Jump
121 in
Bench Press
21 reps
Hand Length
9.88 in
Arm Length
30.38 in
Recent RotoWire Articles Featuring Kenneth Gainwell See More
NFL Picks: Odds, Picks and Predictions for Conference Championship Weekend
Yesterday
Yesterday
John McKechnie digs into Sunday's Conference Championship matchups and lines up his best bets. Can the Bengals and 49ers pull road upsets and punch their tickets to the Super Bowl?
Weekly Rankings: Conference Championships Value Meter
2 days ago
2 days ago
A.J. Brown tops the wide receiver list for this week's Value Meter.
Weekly Rankings: Divisional Round Value Meter
9 days ago
9 days ago
Deebo Samuel appears to be back at full capacity, which has multiple impacts to the rest of the Niners' offense.
The Fantasy Year in Review: 2022's Biggest Draft Values
12 days ago
12 days ago
Jim Coventry looks at players who outperformed their preseason ADP this year and analyzes their value for next season.
Best Ball Journal: Underdog Playoffs Rankings Update
17 days ago
17 days ago
With the potential to play and be the top scorer in each of the four playoff weeks, Josh Allen is the clear 1.01.
2021 Fantasy Outlook
The latest product of the Memphis running back factory, Gainwell follows Antonio Gibson, Tony Pollard and Darrell Henderson to the NFL, and while he may not be quite as fast as those guys, a 4.44 40-yard time at his pro day suggests Gainwell can also scoot. He showed impressive elusiveness, balance and vision in college, and despite being a bit undersized for a running back, he was more than willing to lower his pads and try to grind out yards between the tackles when asked to. That approach won't necessarily work against stronger defenders in the NFL, but with only one season of significant touches at Memphis on his resume after he opted out of the 2020 campaign, accumulated wear and tear is not a concern. Gainwell also has the receiving and pass-protection skills to carve out a role on third downs, giving him a path to less physically demanding touches, while also providing some early down production. Unfortunately, after being taken in the fifth round by the Eagles, he lands in a crowded backfield that has Miles Sanders in the top spot and an experienced backup in Boston Scott - not to mention QB Jalen Hurts - competing for carries and touches. The path to playing time is precarious, and the Eagles offense won't necessarily be a hotbed of RB production.
More Fantasy News